Summaries, opinions and what’s next?

This is my penultimate post. It includes some of the personal opinions from scientists scientists and fishers (unnamed) that I have met along the way.

I came out here to tell you about a fisheries success story – obviously, things were not exactly as they seem…so…here goes:

ABUNDANCE. Is the Loco fishery recovering (is the abundance of Loco increasing with the use of the TURF system), is it just in a static state (is the number steady) or is it declining (are there fewer and fewer loco)?

Science: Its probably static. The problem is that its difficult to tell in terms of numbers as there is still a lot of poaching which goes unrecorded. At present, people appear to be disappointed. It recovered after the initial collapse in the early 1990’s, but there has been no continual improvement in the catch since those early days since the TURF implementation (20+ years ago).

Fisher: There are less and less every year and the decline is not slowing down. With bad market prices and poaching, the problem is going to continue even with our official closed areas (TURFs) in use.

POACHING. Is poaching the main problem that is limiting the recovery of the Loco fishery / natural populations?

Science: Poaching is a huge problem now in this (the Loco) fishery and many other fisheries globally. Loco market prices are currently low and this means it’s often more profitable for fishers to extract illegally, especially in places where populations in managed areas (TURFs) are low. Whether its the “main” problem or not is difficult to tell, but it certainly is not helping.

Fisher: Many of us poach nowadays. This is because the number of Loco are low and if we want to catch enough, we have to fish in areas outside our own TURF area. It’s not a massive risk for us either as often there is no one actively policing the our local waters and, if we do get caught, there is no real punishment. I think if there were more Loco inside our areas we would not need to poach and this eventually would mean that the fishery would be more predictable and perhaps sustainable.

Science: There is a lot of work going on in Chile in terms of measuring the marine fisheries. Chile, however, is a very large country with a lot of coastline. Measuring catches accurately and consistently is no easy task  and we need more financial investment. Therefore there is obvious room for improvement. Organizations like IFOP may well be more useful if they became fishing institutes rather than consultancies…This would mean data / information would be more readily available.

Fisher: Not entirely sure. Sometimes they measure what we catch, sometimes not, but its certainly not consistent.

TOMORROW. Do fishers care about tomorrow, really? Or is the race for fish still prevalent…even with the TURF system in place with the Loco fishery?

Science: This is a difficult one. It obviously depends on who you talk to. There are many fishers who are worried about the future of their fisheries. Today there is certainly more awareness of environmental issues. Whether that translates to “caring” is hard to establish. Our current policies (referring to the TURFs systems) are old. They have not changed in 20 years. It is important to constantly reevaluate management systems and the TURF system in Chile is no exception. So, fishers are worried about tomorrow. Whether this means that the race to fish has disappeared is impossible to say.

Fisher: Some of us do care about tomorrow. I think that those of us who care more are those that have experienced problems in our fishery. The fishers who have not had many problems have no reason to worry and therefore no reason to be concerned about their current fishing habits.

ENOUGH. Are the policies in Chile working well enough?

Science: There are obviously good and bad points to any policy or management system. With regards to the TURF system. It worked very well and stopped a major fishery collapsing. This, however, was 20 years ago. No policy lasts forever. They must be constantly renewed and evaluated. This is especially so as markets change, economies change, the environment changes and so does the industry. Management must therefore be very flexible and ready to adapt. Therefore, the answer to your question is no. We can always improve on what we have, especially with old management systems.

Fishers: No. If they were enough then fishers would not be poaching and having to struggle to make a living. Different areas are obviously experiencing different things, but in general, the current management systems are not working well enough and could be improved upon.

These are all words / ideas that have taken center stage during my time in Chile. One might argue that there is never a succinct, black or white answer to any of the above. There is also subjective versus objective. Fisheries is a tough field / game. It involves lots of people, opinions, ideas and geographic areas. I hope the above has at least shed some light on some of general opinions of fishers and scientists regarding the a fishery that was on the brink of collapse, was saved by a unique management system and that now appears to lie waiting for more improvement after 20 years of use. 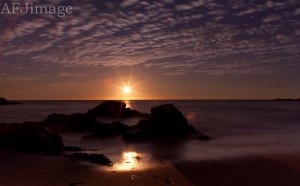 Sunset over the worlds first MPA

04 Mar This entry was published on 04/03/2013 at 18:58. It’s filed under Fisheries Science and tagged Chilean Fisheries, Fisheries, Marine biology, TURFs. Bookmark the permalink. Follow any comments here with the RSS feed for this post.