I wrote a post on the 15th December describing the “success” of the Loco fishery and how it has been brought back from a stock collapse by collaborations between science, fishers and management. Since then I have written about my experiences up and down the Chilean coast and how, really it has been hard to find examples of the reported marine stewardship among fishers. Many talk of an ever declining amount of smaller Loco and how the future really does not look as bright as I first imagined.

But what about the science that has been published on this subject? Is it wrong, are the fishers I have met telling me untruths, or did I misinterpret the literature?

Well, really it’s very difficult to accurately determine if I have been lied to or if the fishers are incorrect. Let’s, however, assume that peer review science is thorough and rigorous and tells its side truthfully and fully. If this is the case, then why does the red portion of graph below show a generally steady catch of Loco whilst everyone I talk to says it is becoming rarer and smaller in size?

TURF implementation and after

How many – not how much…

The first important point to make is that the graph above measures catch in metric tons, not number of individuals. Why is this so important to understand? Well, it means that really we don’t know if a catch of 4 tons is made up of lots of little Loco, or of few, large Loco (see graph below). Measuring the catch in terms of weight tells us nothing about numbers of Loco. therefore, our “stable” catch could well be different (in terms of numbers) between years (one year few big Loco, the next, many small Loco). 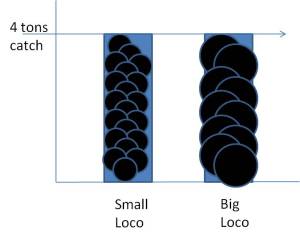 If we did know how many Loco were making up the tonnage what would this mean? Well, it would mean we could start to try and decipher whether or not the “Loco are getting smaller” statement is true. If the weight of Loco being caught is constant but the number is increasing this is a sign that the fishers are catching smaller and smaller individuals (likewise; if the weight is constant but the number is decreasing this would signify that the size of the Loco was increasing).

What about the amount of fishing taking place? This is another thing we don’t know from the graph above. How many fishers are diving for Loco, how many hours are they diving for? What could we decipher if we knew this fishing effort ? Well, ultimately, we would have a much better idea if the fishery was sustainable…(perhaps)…

What if 10 Loco per year are being caught and these are caught in 10 hours of diving every year. Well, this is better. We now know the effort required to catch our stable catch is the same year after year. But what happens if we get 10 Loco a year, but every year the hours of diving doubles? This is not good news. This spells trouble. Here we have a stable catch with an increased effort. This means fishers are having to fish harder for the same catch, which in many ways says there are fewer Loco to catch, hence the increased fishing / searching time for them (see below). 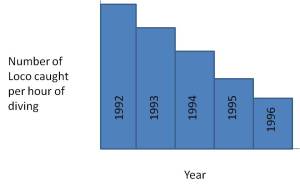 nb: catch the same in each year

Another scenario to address would be that of Hyperstability. Hyperstability occurs when catch per unit effort remains stable whilst the true abundance in the fishery declines. So in essence, this would be a scenario where our fishers are catching the same amount per hour of fishing (catch per unit effort is stable), but the actual natural populations of Loco are declining. This phenomenon may occur if the fishers are able to find the Loco with more accuracy than previous years, perhaps through technological creep – when technological advances allow us to fish harder than previous years for a dwindling resource – a real life scenario in many global fisheries today. This is dangerous position to be in as managers and fishers see a stable resource, and therefore believe levels of expoitation are sustainable. However, it does not last. Without correct regulation the natural population continues to decline until sudden collapse at which point the fishery suffers both ecologically and economically. In order to try and understand if a fishery is “hyperstable” it is necessary to have detailed data of catch, effort (see above) and geography (below), unfortunately something which often does not exist.

Where is it happening…

Geography is also something that is important in understanding what is happening in a fishery i.e. Where are the Loco fishers fishing? Here I am not talking about inside or outside management or protected zones. Instead more about the actual geography of the fishing effort. For example, is there more fishing effort closer rivers or coastal cities? Is the effort always high in these areas or does it change with season? Has the fishing effort moved over the years?

These are important questions to address. When explored they can inform us as to where fishing pressure has been greatest. For example, it is likely that during the early exploitation of the fishery pressure was concentrated around established fishing ports. Then as fishing pressure increased (more fishers and more time fishing) the pressure moved further out from the ports towards yet unexploited portions of the coastline. In some cases with detailed information on the geography of exploitations it may be possible to predict future fishery movements, an important consideration when designing future management strategies.

An simple example would be the design of closed areas / Marine Protected Areas. If the goal of the MPA formation is to conserve a wild population it would be more advantageous to close an area that is yet to be fished (or has only recieved mild fishing pressure). If however the goal is to replenish / rebuild an exploited stock, it would make more sense to close an area that is alreday exploited. Such information comes from knowing the geographic distribution of fishing efforts up and down the coast as well as what has been landed and from where. In addition it is very useful to know what exists where, i.e. the number of Loco present in a given area. This information only becomes available through non-destuctive surveys which are both time consuming and generally expensive.

Data is important in understanding what is really going on in a fishery. This iterates the importance of concise and consistent scientific surveys to tell us about landings, locations and natural populations.

In terms of what I heard from local fishers versus the published science:

Well. It’s upsetting. It’s easy to read the science and think “Wow, fisheries success”, but on closer inspection it’s important to really dig deeper and see if that is a just and sensible synopsis what has been published. Here, I have presented a few ideas that need proper consideration before a full and sound conclusion can be drawn.

All opinions in this post  are entirely my own !!!

In addition, unravelling a fishery is no easy task and I am still learning how to tackle such problems – and likely will be for as long as I stay in this area of science – I am sure I have probably missed important points out from this post – therefore please do feel free to comment and share your opinions and / or expertise.

21 Jan This entry was published on 21/01/2013 at 15:48. It’s filed under Fisheries Science and tagged Chilean Fisheries, Fisheries, Fisheries management, Marine biology, Marine Protected Areas, Territorial Use Rights Fisheries. Bookmark the permalink. Follow any comments here with the RSS feed for this post.