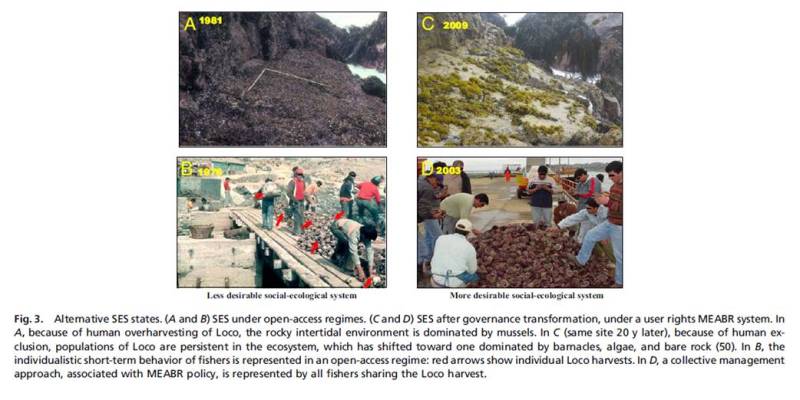 I mentioned a while back that “Chile has emerged as a nation that has implemented innovative and original fisheries management strategies early on in its development“. I still have not gone into any real detail about why this is so. Therefore the following post discusses the management strategy that has brought me across the water to Chile.

The whole Chilean story I am about to tell revolves around the word “stewardship”….have a look here just to familiarise yourself with the word – this is important (pay close attention to the second definition)!

Chile has a lot of small scale fisheries / it has a large artisanal fisheries sector. Very basically this means it has a lot of fishermen that don’t work in huge groups on huge boats with big nets and lots of machinery. It actually has a lot of fishermen that work from small boats or from the shore, with light equipment, in small groups or alone. This intertidal sector makes approximately $250 million US per year! So these small scale guys are really important to Chilean marine fisheries.

Although there are approximately 60 species fished by these artisanal fishermen, in particular this story revolves around / begins with the small scale benthic fishermen that fish for the Loco(Concholepas concholepas) – a large, carnivorous edible sea snail. 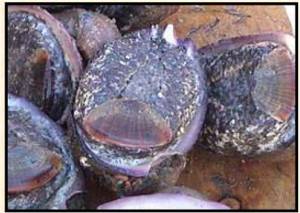 These fishers fish by hookah diving (a basic form of surface supply diving where the fishermen is connected to the surface by a single air hose which passes air to him / her from an air compressor). They work from approx. 10 – 20m collecting these snails off the rocky reef bottoms.

Up until the early 1970’s Locos were generally fished for domestic (within Chile) consumption and levels of their extraction were generally around 5 metric tons per annum. The Loco actually fetches a good price on the local and international market and therefore ws a good product to fish for especially if exportation was an option (please note this may have changed in recent years but for the sake of simplicity I will stick to the past story). In the mid to late 1970’s when exportation became a viable option there was a dramatic increase in the number of Locos being fished and catches reached a staggering 25,000 metric tons per year by the early 1980’s (see red section below).

During this time fishermen were actually transporting their small boats up and down the coast of Chile to catch as many Loco as possible as rules and regulations at the time generally did not exist (i.e. it was an open access fishery). Obviously…as you well know and as I have mentioned in past posts, fishing too hard is not sustainable and major problems generally ensue if “greedy” fishing or “the race to fish” continues for too long. The Loco fishery therefore peaked and declined until over the next ten years caused by regulation problems (i.e. there was no control over the fishers or how much they were fishing) (see red section below). 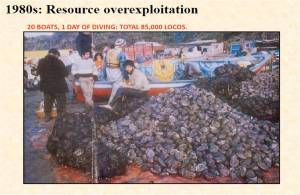 This, unfortunately is where a lot of global fisheries currently lie. In a state of decline / overfishing and bad management / inadequate regulation. Steady catches year to year may be rare as either 1) the stock size varies so dramatically as we gamble with the biology of the stock, fishing far above a sustainable level, 2) the amount of fishing of the stock varies considerably meaning catches fluctuate. Worst case is that the catch is consistently low which you think would surely tell us something!

Back to the story…Thankfully the Chilean government, managers and scientists had the foresight to see that the fluctuating, yet declining catch was neither a good nor sustainable sign. They therefore decided to close the Loco fishery completely in 1988.

Up until the 90’s Chile was under dictatorship. The combination of a collapsed fishery and a return to democracy meant that in 1992 the fishery opened after this “window of opportunity” (see red section in graph below) with new fisheries legislation in place – the most important change in which was the integration of user rights (a rights-based management system – see my two previous blogs 25th Nov. and 10th Dec.).

1) Artisanal fishers got exclusive fishery access rights in a zone that extends 5 nautical mile from the shore and runs along 2,500km of the Chilean coast line. This was aimed at reducing conflict between the artisanal and industrial fishers … and …

2) Territorial User Rights for Fisheries (TURFs) were assigned to inshore areas of the seabed to registered astisanal fisher associations for the management of benthic resources (under the term Management and Exploitation Areas for Benthic Resources (MEABR)). 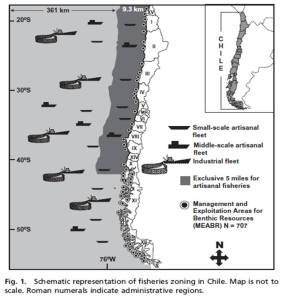 So, with new legislation in place and the Loco fishery reopen under the TURFs management framework the artisanal sector has maintained a fairly consistent level of catch (albeit a lot lower compared to the overfishing boom in the late 70’s) for the past 20 years.

This story however is not this simple. It was not just a case of realising the fishery was in trouble, closing it and reopening it with a new idea for management. Long before the Loco fishery actually collapsed, Chilean marine biologists (headed by Prof. Juan Carlos Castilla) were working on the Chilean coast running experiments looking at the effects of excluding humans from the shoreline. This may sound like an obvious thing to do, but at the time it was the first experiment of its kind and luckily one that was done at a spatial scale (15 ha total) that can be applied directly to real life and at a temporal scale that lasts until the present day.

So in basic terms the scientific community were ready with the answers when the Loco fishery collapsed. Knowledge of population growth rates, resilience and shore community structures meant that when fishermen were in desperate need of advice regarding their declining catches the scientists were at hand to answer questions. This paved the way for the formation of a strong link between the fishing community and the scientists and allowed the formation of the above mentioned TURF and  MEABR management strategy which has been implemented since the re-opening of the fishery until the present day (see red section below).

TURF implementation and after

The move from an open-access management system to the TURF / MEABR system includes the following benefits:

As of 2010 there are 707 MEABR areas decreed to fishers organizations which coverover 1,100km² of the coastline (see map above).

There are however still problems associated with the TURF / MEABR system in Chile:

The introduction of the 5 mile exclusion zone for the middle-scale artisanal fishers has also brought considerable benefits to the artisanal sector. Now the landings for the middle-scale artisanal fishers has increased 9 fold and industrial catches have declined significantly (ultimatley this means more fish are caught by more fishers – spreading the benefits – i.e. not feeding the industrial “fat cats”).

The Chilean Loco fishery used to reflect the way many of our fisheries are going / have gone….too many fishers fishing too few fish. Lucky science was at hand loaded with solid data to predict and advise as to what was going to happen. The fishers needed help, they trusted the scientists.  There was a window of opportunity. A new system was tested and agreed upon and then put into practice. Governance was transformed. The new system regulates catches, benefits biodiversity and promotes environmental awareness and stewardship in a sector (fisheries) renowned for lacking these very traits. All in all a definite succes story from which other fisheries can learn.

For me the key point to take from the story is that science needs to be ready (with solid data) to advise when problems do occur (unfortunately they generally do before we try and manage in the right way). We need to thoroughly monitor our catches, landings (there is a difference), fisher populous (number, activity and attitude) and economy derived from the fishery. Without good knowledge of these things, if / when things do go wrong it’s likely that we won’t be able to right them either in time to save the fishery from biological collapse or in time to stop economic problems occurring…or both. The chilean system has promoted marine “stewardship” !

Whether this “worth” is a function of money or beauty or just because, is another story, and really at this point not important. The main thing is that the system has turned around what potentially could have been another fisheries disaster; something, we unfortuantely see / hear about all too often.

Disclaimer: It is important to mention that management never stops. It needs constant review / renewal so that it may be ready for hiccups that may occur on the way such as natural disaster and economic change.